In the midst of the Corona crisis, the smartphone industry is facing a lot of difficulties. The supply of smartphones has also been affected, due to which the prices of some phones have also increased. Meanwhile, a special smartphone of Honor is selling at more than twice its original price. However, the reason for the sudden rise in the price of this smartphone is probably somewhat different. This smartphone is Honor Play 4 Pro. This phone of Honor is currently available at a premium high-end level.

This 5G smartphone from Honor is available on eBay in the US for $ 999 (about 75,500 rupees). The price of this smartphone in China is 2,999 yuan (about $ 423 or Rs 31,900). Apple's iPhone 11 Pro can be purchased at this price. Honor launched its smartphone Honor Play 4 Pro in China earlier this month with a special feature. However, the special feature of this phone is not its camera or processor. 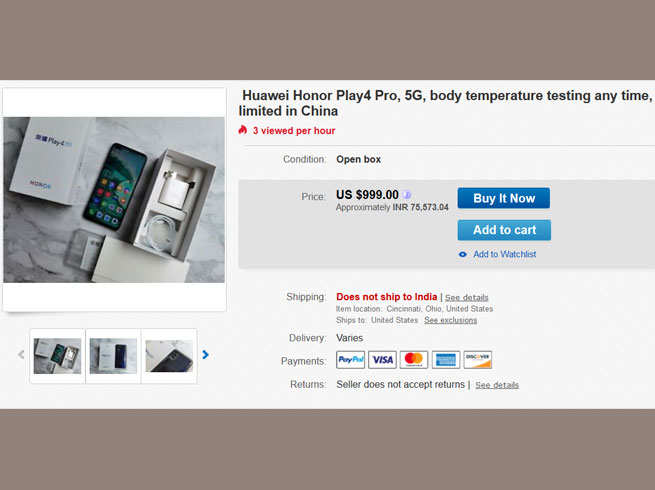 Sensor to tell temperature is installed in the phone

2 cameras for selfie in the front of the phone

Cricket board has written down Pakistan's spelling wrong, trolls fiercely on social media – pakistan cricket board brutally trolled over spelling mistake of pakistan

Realme Narzo 10 and Narzo 10A will be available on Flipkart, they have 5000mAh strong battery

Gautam Gambhir said that Dhoni is better captain than Ganguly...

Saurabh Ganguly gave Dhoni a plate in the winning team:...