Binance Looking for a New CEO –…

This Bitcoin Indicator May Suggest The Bull…

El Salvadorians take to the streets to…

These Indians were not in color, otherwise…

Reality is preparing to bring its smart TV. Recently, a Twitter user has tweeted an image of the Reality TV listing. The display size of Reality TV was revealed in this image. The BIS listing had revealed that Reality TV is coming in a size of 43 inches. Now a new reality remote control has appeared on the Bluetooth SIG certification website. Some reports said that it could be the remote controller of the soon-to-be-launched TV of Reality. Remote control gets certification

In the Bluetooth SIG certification image, Realme Remote has been given the model number RTRC1 and now it has got certification. The details of the product reveal that it is Teva's remote control. Reality remote control will run on Bluetooth v5.0. This remote control will have a 4.0 host controller and battery. Apart from this, more details of this remote have not been revealed yet. For Reality, the television segment will be completely new and the company can bring 43 inch screen size and other display TVs in it. 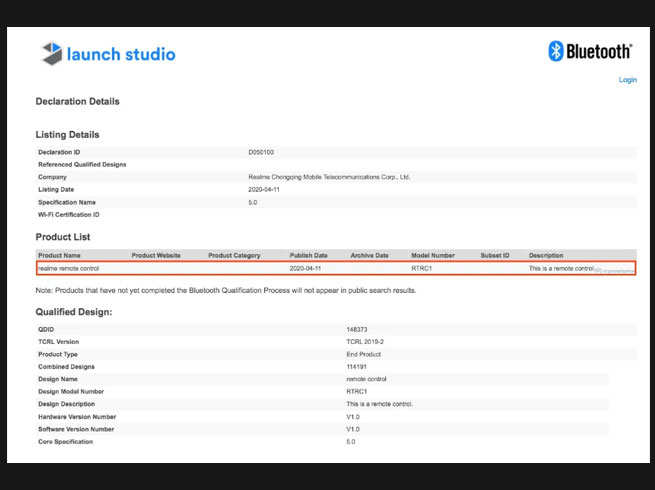 There can be some such specifications of television

According to reports, the 55-inch model of Reality TV will have 4K Ultra-HD QLED display with quantum-dot technology and HDR support. The latest version of Android TV can be given in Smart Television of Reality. This TV will also support OTT platforms such as Netflix, Amazon Prime and Hotstar. Reality was supposed to present its smart TV at the Mobile World Congress this year, but the event was canceled. Realme's smart TV will compete with Xiaomi's Mi TV, OnePlus TV, Motorola, Nokia and TCL television. However, with the other details of television, nothing has been said about its pricing yet. But, like smartphones, the price of television can also be kept aggressive, so that the company can hold its own in the market.

Vivo Y51 Vivo Y51 phone will be launched soon, may be priced

I did not expect this from you, sir! Bill Gates gave a disputed statement about India and the vaccine

Altcoin Roundup: Crypto Credit Cards Could Be the Missing Link...

Binance Looking for a New CEO – Exchange’s US Venture...

This Bitcoin Indicator May Suggest The Bull Run Is Still...