Binance Looking for a New CEO –…

This Bitcoin Indicator May Suggest The Bull…

El Salvadorians take to the streets to…

These Indians were not in color, otherwise…

Surykumar LBW Decision: There was a ruckus…

Fans of popular apps TicketTalk and WhatsApp are being alerted of a dangerous scam, with the help of which a lot of malware can be injected into their phones. The good thing is that the short video sharing app TikTok has already been banned in India, but now with the help of its links, malware is being sent to many users. This game of fake links is running with the help of messaging service WhatsApp.

It has been revealed that apart from the world's most popular chatting platform WhatsApp, fake messages are being sent to users on SMS messages. Currently, this scam has come to light in India, where cyber criminals want to target users by taking advantage of the recently imposed TikTok ban. Greed to watch the Tittock video, users are being asked to click on the malicious link.

TikTok is also included in the list of 59 apps banned by the Government of India and the active userbase of this app has been up to 500 million active users globally. The reason behind banning the app was stated that apart from national security and defense, it can become a threat to the privacy of users and the integrity of the country. Users can no longer access Ticketlock but scammers are luring them to do so. 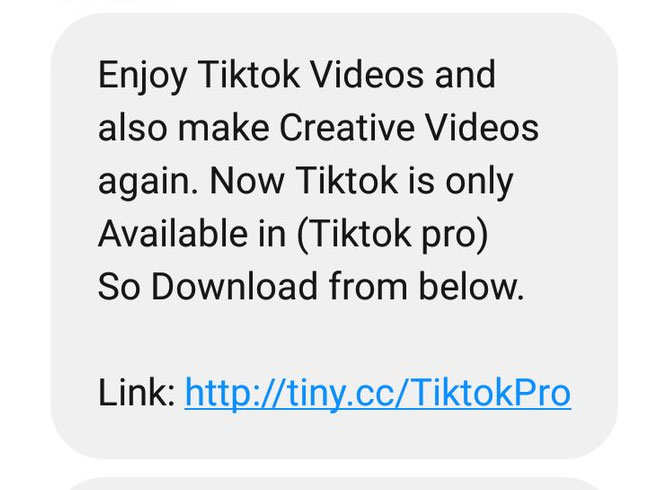 Many such fake messages are being shared on social platforms, in which TikTok is being offered to download. All these links are part of a scam and they are intended to reach the phone of app users with malware. Security experts of Maharashtra Cyber ​​have warned the users about this. Such links ask the users to download and install the apk file and spy on them taking permission from camera to mic.

Ban was also imposed in these countries

Keep in mind, TicketLock can no longer be accessed with the help of any app or link in India. In such a situation, do not accidentally get misled by such messages and do not click on any link. Malware can steal personal data once it reaches the phone, with the help of which can be carried out from blackmailing to banking fraud. Let me tell you, after India, Ticketlock has been blocked in US and Australia too.

Buy branded Split AC for the price of Window AC….

Personal data of crores of Facebook users sold for ₹ 41,500

Change your PIN and password on PhonePe in this way, reset, following these steps will be many tasks

The mess of charging is over! Realme Buds Q2 earbuds have arrived, will work for hours even on a 10-minute charge

WhatsApp: run WhatsApp with two numbers on one phone, learn how – how to operate two whatsapp number on one device

Binance Looking for a New CEO – Exchange’s US Venture...

This Bitcoin Indicator May Suggest The Bull Run Is Still...

These Indians were not in color, otherwise it was decided...